As game 162’s are finishing up around the MLB today, the independent leagues have all finished their seasons as well.

(Central Islip, N.Y., Sept. 30, 2016) – The Sugar Land Skeeters topped the Long Island Ducks 5-3 after a three-run rally in the seventh to take their first ever Atlantic League Championship title. Sean Gallagher managed seven innings with two earned runs and six strikeouts, while Derrick Loop earned his 33rd save of the season. Juan Martinez was named the 2016 MVP of the Skeeters.

The Ducks would strike early, with Fehlandt Lentini stealing home and scoring from third base with Delta Cleary Jr. at bat. However, the Skeeters would respond in the top of the fourth with a double to left field from Lance Zawadzki, bringing Jeremy Barfield and Travis Scott across the plate to give the Skeeters a 2-1 lead going into the fifth.

The Ducks would then tie things up in the bottom of the fifth after a double into center field would bring Lentini in from second to score. Cody Puckett would then single to third base, but a throwing error from third baseman Juan Martinez would allow Puckett to advance to second and Lew Ford to score, giving the Ducks a 3-2 lead going into the sixth.

The Skeeters would successfully hold the Ducks to three runs, ultimately giving them a 5-3 victory and their first ever Atlantic League Championship title.

The Winnipeg Goldeyes are the 2016 American Association champions as they rolled past Wichita in game five, 11-4. Winnipeg pounded out 17 hits in the contest with five batters collecting multi-hit games. Goldeyes CF Reggie Abercrombie had a sensational night going 3-for-4 with a double, two home runs and seven RBI. Winnipeg LF Willie Cabreraadded four hits and three runs scored while DH Adam Heisler chipped in with a pair of doubles in a 4-for-6 night. Goldeyes starting pitcher Kevin McGovern threw six strong innings in notching the victory. McGovern gave up two earned runs on five hits with two walks and five strikeouts. For Winnipeg, this is their second league title with the first one coming in 2012.

The Ottawa Champions are the 2016 Can-Am League champions as they defeated Rockland in game five, 3-1. Ottawa starting pitcher Austin Chrismon turned in a sensational performance in leading the Champions to the title. Chrismon tossed a complete game allowing only one earned run on six hits with no walks and eight strikeouts. The righty threw 123 pitches in the contest with 86 of them being for strikes. Offensively for the Champions, DH Kenny Bryant led the way going 2-for-3 with a home run and three RBI. Ottawa SS Daniel Bick had a pair of hits in four at-bats while RF Adron Chambers and CF Sebastien Boucher each had a hit and scored a run. For the Boulders in the losing effort, C Marcus Nidiffer and LF Devin Harris both went 3-for-4.

The Evansville Otters used pitching and defense to win Game Five, 1-0, clinching their second Frontier League Championship in team history on Monday night. Hunter Ackerman got the start for Evansville, and he was superb. Ackerman carried a no-hit bid into the seventh inning, but gave up a triple to Kyle Gaedele with one out in the inning. Ackerman tossed seven and two-thirds scoreless innings, ending the night with the victory.

The only offense needed in the game came off the bat of Rolando Gomez in the bottom of the third inning, as he drove in Christopher Riopedre with a single to center field, giving the Otters the only run of the game. That lone run ended up being enough as the Otters pitching staff combined for a one-hit, shutout of the Rascals in the decisive Game Five at Bosse Field.

The game was low scoring, but there was plenty of drama. After Ackerman gave up the one out triple to Gaedele, he faced his first real adversity of the night in that seventh inning. With the tying run at third base and one out, Ackerman blew a fastball by Jason Merjano to get a much-needed strikeout. Ackerman then got some help from his shortstop for the final out in the inning, as Riopedre made a sliding stop deep in the hole on the left side of the infield, and delivered a strike to first in time to get the third out, preventing the run from scoring.

Clint Freeman led off the eighth inning for River City with a deep fly ball to center field. This time it was Chris Sweeney who made the play, tracking down the fly ball as he crashed into the wall, holding on for the first out of the inning. Ackerman then faced a pinch hitter in Braxton Martinez, and got him to groundout for the second out of the inning. That ended Ackerman’s night as he exited with two outs in the eighth inning and the Otters turned it over to the bullpen.

Ken Frosch was the first pitcher to emerge from the bullpen, but he walked the only batter he faced to put the tying run on base. Evansville then made a quick change as the Otters brought in Trevor Walch to face the right handed hitting Johnny Morales. Walch also walked the first batter he faced bringing up the red-hot, Josh Ludy with two runners on base and two out in the inning. Walch got Ludy to fly out to right field, ending the inning and the scoring threat.

With Evansville three outs away from their second Frontier League Championship, the Otters turned it over to their closer, Randy McCurry, for the top of the ninth inning. McCurry led the league in saves in the regular season with 23, and he picked up his third save of the postseason on Monday night. McCurry cruised through the ninth inning. He got the leadoff batter to ground out to Josh Allen, struck out the second batter, and finally got the final batter to ground out to Nik Balog at first base to end the game.

With the 1-0 victory in Game Five, the Evansville Otters won the Frontier League Championship Series 3-2 over the River City Rascals. The championship is the team’s second title in team history, with the other title coming in 2006. River City fell in the finals for the third consecutive season.

Hunter Ackerman picked up the win in the game, and was also named Most Valuable Player of the Frontier League Championship Series. Randy McCurry was credited with his third save of the playoffs and 26th overall in 2016.

By Adam Rickert
Utica Unicorns 5 AT Birmingham-Bloomfield Beavers 0
UTICA — The usual suspects came through once again for the Utica Unicorns as their stars led them to a USPBL Championship victory on Sunday afternoon.
Austin Crutcher and Chris Cruz hit solo home runs in the fourth and fifth, respectively, and Donny Murray tossed five and two-thirds innings of shutout baseball to lead the Unicorns to a 5-0 win over the Birmingham-Bloomfield Beavers.
Cruz, whose solo homer in the fifth inning gave Utica a 2-0 lead, has been arguably the league’s hottest player in the past month.
Since August 7, Cruz has collected 19 hits, eight home runs in 26 RBIs in 17 games.
In that span, the Unicorns went 11-6, improving their regular season record from 12-21 to 21-27 before winning both playoff games, including the title match.
“It feels awesome,” said Cruz when asked about playing such a huge role in his team’s turnaround. “There’s an old adage that hitting is contagious, and that’s definitely been true for us this year.”
Once again, the Unicorns proved that hitting is indeed contagious. They gave themselves some more breathing room in the ninth inning thanks to a rally that began with a two-out double by Cruz.
With the bases loaded, catcher Kyle Hamner brought in two more runs with a single to extend the lead to 4-0.
Designated hitter Mike Logsdon added another insurance run one batter later, lacing a double down the left field line that brought home Tyler McVicar.
Hamner and Logsdon were also major contributors in Saturday night’s playoff game between the Unicorns and Eastside Diamond Hoppers.
In the 4-3 victory over the Hoppers, Logsdon had a two-out, two-run single while Hamner blasted a two-run homer.
In addition to timely hitting, Donny Murray turned in a splendid performance on the mound for the Unicorns.
Murray, whose only other win came on July 10th when he no-hit the Beavers, went five and two-thirds innings on Sunday. He struck out seven Beavers, gave up just five hits and walked no one.
Seth Brenner, Andrew Potter and Mitch Aker pitched the game’s final three and one-third innings. Like Murray, none of the three relievers surrendered a walk.
The victory encapsulated how baseball is a game of streaks. The Unicorns finished with the worst record of the three USPBL teams over the course of the regular season, but were the hottest of the trio when it came down to crunch time.
Because of their ability to find their stroke at the right time, the Unicorns will be remembered as champions of the USPBL in the league’s inaugural 2016 season.
“That was obviously our goal the entire year,” said Cruz. “As a team, you want to come together when it matters.
“It’s hard to find words for it right now.”

8/23/2016– The Tucson Saguaros are 2016 Pecos League Champions. The Saguaros defeated the Trinidad Triggers 2 games to 0.

August 3, 2016
The New York Sullivan Explorers have defeated the Watertown Bucks by a score of 8-6 to win the first Empire League Championship Series.

The Desert League is currently the only independent baseball league competing this fall. There have been a few bumps in the road that come along with start-up leagues, but Indy Ball Island hopes to have further updates on the league here in the next week.

The Somerset Patriots, including pitcher Will Oliver, will begin their quest to win the Atlantic League Championship series at home on September 30th.

Oliver, the Frontier League pitcher who was ruled ineligible after much controversy surrounding his age, has settled in nicely with the Patriots in the Atlantic League.

After causing his former team the Evansville Otters to forfeit ten games due to his ineligibility, Oliver quietly went to Somerset to continue playing the rest of the season in a league that doesn’t have age restrictions.

While not as dominating as he was in the Frontier League (his stats for 13 games with the Otters included a 9-2 record and 1.59 ERA), he has still continued his winning ways with the Patriots.  Since joining the team at the beginning of August, he has a 6-2 record with a 3.17 ERA  in nine starts during the regular season.

Those are great stats considering the amount of pressure and stress that he’s been through this season;  However, his playoff appearance this past weekend was where he really shined.

Oliver took the hill in a win or go home Game 4 playoff match-up against the Long Island Ducks, and he delivered. He pitched a masterful complete game shutout allowing only three hits over the full nine innings.  The Patriots won 4-0 and forced a Game 5 with the Ducks 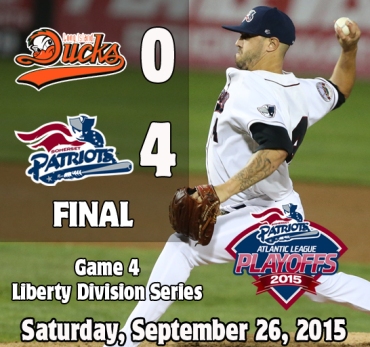 The next day, Patriots pitcher Roy Merritt followed Oliver’s performance with a complete game shutout of his own, leading the Somerset Patriots to the Liberty Division Championship.

The Atlantic League Championship Series between the Somerset Patriots and the Southern Maryland Blue Crabs begins September 30th at TD Bank Ballpark in Bridgewater, New Jersey, home of the Patriots.