I’ve been to hundreds of baseball games in the past few years. Players, on teams both home and away, come and go constantly in this sport.

As an advocate for indy ball and minor league baseball, I’ve seen plenty.

However this weekend, I was able to meet up with a team that made me feel as if I’ve known all of them since the beginning of their careers. This might sound a little crazy, especially since I had only met two of the guys previously, but sometimes, that’s just how it happens in baseball. When you get a group that gels so well together, it’s easy to come in and feel as if you belong.

The Florence Freedom of the Frontier League came into town this Friday to play a three game series against my “home team” the Washington Wildthings. From the coaching staff (Pelf, AJ, Sean, and Brian) to the players (especially the fantastic bullpen), everyone welcomed me like I was coming to their home stadium, not the other way around!

The Freedom haven’t gotten off to the best start in the league – they’re currently in last place in the West division – but that hasn’t stopped their drive, determination and great attitude. While they have a tall mountain to climb, sweeping the Lake Erie Crushers last week and going 8-2 in their last 10 games shows that they are moving steadily in the right direction.

For the most part, the Freedom are a true indy ball team. The majority of the players have been around indy ball their entire careers with only a handful of players that have had any affiliated experience. For more than a few guys, including two players who just concluded their college careers, Florence has been their only professional experience.

In a league where affiliated cast-offs have become more the norm than the exception lately, this team has committed to having a roster full of true independent players.  That may be why I’m so partial to this group.

The indy ball life is tough, but for 80% of the team, that’s all they’ve ever known.

Friday, I was able to make their stay in Washington just a bit easier.  After catching up with a player I’ve known for the last few years thanks to this site, outfielder/DH Austin Newell, I passed out as many 20% off Denny’s restaurant coupons as I could collect so far this season.  A 20% off coupon may not seem like much (and in the grand scheme of things I know it isn’t!), but the guys were all more appreciative than I could ever have imagined.

During the game, I also got a chance to talk to their bullpen and get to know them. As far as indy ball bullpens go, this one is full of the characters you would expect. They have the veteran indy ball guy, a couple of affiliated guys – one vet spending his last days in pro ball and a rookie trying to fix some things to eventually get back, true rookies, and guys at every step in-between of their careers. They’re the perfect balance of being loose and having fun while getting down to business late in the game. They instantly won me over.

I did happen to notice that their bullpen snack bag was lacking a bit during the game. So naturally, I decided to take on the challenge to make them a better one for the next day. Saturday morning, I went shopping for whatever snacks, candy and pizza thingys/bread things (the name used by Bubba and the others who have never experienced the greatness of pepperoni rolls) could fit in the Leonardo Teenage Mutant Ninja Turtles backpack I bought – they clearly needed an upgrade over the Disney Princess backpack they’ve been carrying!

If you love independent baseball and want to help the guys but don’t know how, may I suggest doing something similar for a team.  Seeing the looks on guys’ faces when they are handed a cartoon backpack filled with treats is really something special.

As it turns out, the guys had a surprise for me as well! During the exchange after BP, the bullpen handed me a ball signed by the entire team and before the start of the game, AJ their hitting coach came out with a brand new Florence Freedom bat signed by everyone. 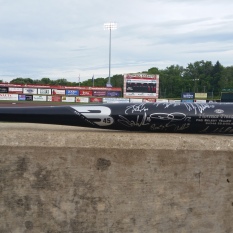 Honestly, I don’t do what I do for anything. I write this site and help players when I can because I truly love this sport and the guys that play it. But with that being said, it is incredible to be treated the way I have been by this team. I was absolutely blown away by this group of guys and how supportive they are of me and the site. It was nice to be able to explain to them what Indy Ball Island is all about too!

To the Florence Freedom players (especially my favorite group of pitchers who put up with me hanging around the bullpen – TJ Bozeman, Jeremy Hutchinson, Pete Levitt, Davis “Bubba” Adkins, Tanner Kiest, and  Tony Vocca) and the coaching staff: Dennis Pelfrey, AJ Cicconi, Sean Repay, and Brian White, THANK YOU for a perfect weekend of watching indy ball. Just know that you all have a fan for life no matter where you go! Good luck for the rest of the season and beyond!