As 2015 comes to an end, I just wanted to thank you all for making Indy Ball Island so great! It was a crazy year in independent baseball with all of the (failed) start up leagues and the other stories from more established leagues.

Over 71,000 people from 91 countries visited Indy Ball Island this year!

Re-Inventing Indy Ball? The Heartland Of America Baseball League – Q & A with Director of Operations. As we all know… this league never materialized after so many other issues arose.

The East Coast Baseball League Ends Before Ever Playing a Game.

Japanese Independent Baseball Tryouts Coming to the US. Look for a follow up in 2016 with some of the players who were signed to contracts!!

Why Isn’t Anything Being Done About the Evansville Cheating Scandal?  A week after this article was published, the Frontier League did in fact force Evansville to forfeit ten games.

I had a fun and interesting 2015 covering indy ball. Thank you to all the players, coaches, front office staff, and fans who made this year so enjoyable! Thank you for allowing me to bring you some of the stories surrounding a part of baseball that often gets little attention outside of the towns that they play in.

Here is to an even more amazing 2016! Be on the lookout for more player features, news on any new independent leagues looking to last longer than a few weeks, Japanese Independent Ball, and much more!!

Two weeks ago today (August 4th), I was informed from some players within the Frontier League that big news was about to drop and an official statement would be made public by the league the following day.

However, an official statement was and has never made. The story that has been creating buzz around the league did come out publicly when the Evansville Courier-Press printed an article on August 6th.

It was discovered that an experienced pitcher with the Evansville Otters, Will Oliver, had turned 28 on July 4th, which happens to be against Frontier League age limit rules.

Oliver does not qualify for Veteran status because he was not on a Frontier League roster for 100 games over the last two years. He only played with Evansville towards the end of the 2014 season, not nearly enough to qualify him as a veteran of the league.

What’s worse is that the team had presented three different birth years for Oliver.

Oliver’s real birthday is listed as July 4, 1987 according to Baseball Reference. During the season, he has been listed with a birthday of  July 4, 1988 and July 4, 1987 on different official rosters submitted to the league 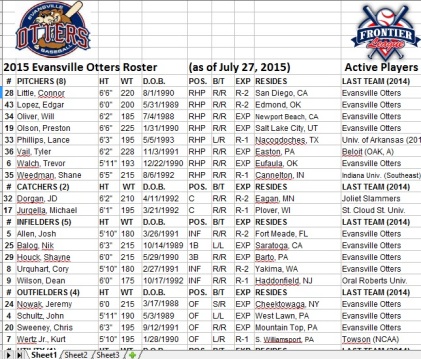 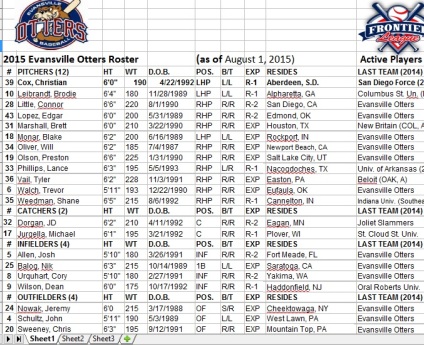 and July 4, 1990 on Pointstreak – the official stats website for the Frontier League. 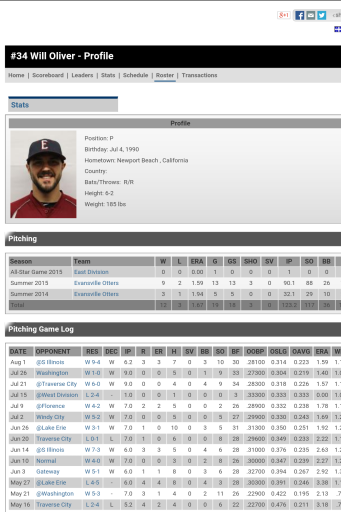 Oliver pitched in 13 games with the Otters with a 9-2 record and 1.59 ERA. Ultimately, the Otters ended up winning 10 games in which Oliver pitched, and the team is currently tied for first place with the Southern Illinois Miners.

Although he is not listed in any transaction page for the Frontier League, Oliver left the Otters at the beginning of the month and went to the Somerset Patriots of the Atlantic League.  On August 10th, he was quoted in an article on myCentralJersey.com saying:

I was in Evansville — and I found out from two other teams before my manager, which was irritating, but it wasn’t intentional because gossip got out fast — that I ended up aging out of the league due to a contract technicality,” said Oliver, who was set to make his team debut during Monday night’s game against the Sugar Land Skeeters.

The league commissioner approved my contract in April, so it’s their fault for missing it. Our manager sent me the contract in the off-season and asked if I wanted to play again, and I said of course. I loved it in Evansville, so it was a no-brainer. But I found out a few days ago that I aged out, and they’re nullifying my contract and I couldn’t play anymore. They wanted to take away my wins I had. I don’t think that’s going to happen, because that’s just not right.

From my research, this is the first time in the 23 year history of the Frontier League that anything such as this has occurred. Something needs to be done to set a standard and show that cheating and fudging birth dates to get around league rules will not be tolerated.

I’ve also heard many rumors among players that they believe the Frontier League will do nothing because the commissioner, Bill Lee, is very close to the Evansville Front Office and doesn’t want to cause any problems for them. The league has called in lawyers to investigate, but it appears as if they do not want to actually bring about a penalty to the team.

The Washington Wild Things Blog is the only other website I could find that even brought up this story.  It seems as if the Frontier League is hoping that they can sweep this under the rug, and no one would notice the difference.

With less than a month to go and the Otters tied for first place, the league needs to do something soon. If they’re worried about ruining the perception of the league by penalizing the Otters, it’s too late.  By not doing anything for over two weeks, they’re already ruining their reputation.