The baseball off season can be a little boring for players and fans alike.  Without games to watch or play every evening, the buzz that surrounds the summer slowly dies down.

That’s where social media comes in to save the off season.

As I was scrolling through my Instagram where I follow hundreds of players that I’ve met over the years, I came across one player who has filled in his time without baseball by playing guitar and singing cover songs.

Stetson Nelson, a member of the Florence Freedom team that won me over one weekend (but was traded the very next day to the Lake Erie Crushers), has been uploading cover songs to fill his free time and his Instagram timeline.

After spending the last two summers playing independent baseball with the Grand Prairie Air Hogs in the American Association as well as the Florence Freedom and the Lake Erie Crushers in the Frontier League, Nelson has made the difficult decision to hang up his cleats after getting a job offer in his chosen career field that he just couldn’t refuse.

His baseball career may have been short, but it certainly wasn’t wasted time.

Since he’s no longer using his spare time to work on his fastball and pitching control, Nelson has decided to use his down time to work on something he’s done since he was a teen, playing guitar and singing.

“I started playing guitar when I was about 13 years old, but I didn’t start really singing until I was a freshman in college,” Nelson said. “I always tried to pick my guitar up every day when I was still playing baseball. It was a great stress reliever for me especially if I had a bad game on the mound.

Well once I finished baseball for good I figured I’d give music more attention. So I started posting covers just to see how it would go, and people seemed to like it so I just kept going with it.”

For Nelson, playing baseball and playing music have a lot of similarities.

“I still have a lot of work to do with both my guitar playing and singing but just like with baseball, it’s something you have to do everyday repetitively in order to make progress so that’s what I’m trying to do.”

He does a lot of country covers but includes a little bit of everything with his Instagram videos. 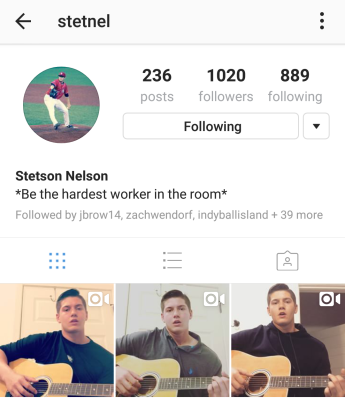