It appears as though Andrew Dunn jumped the gun.  Last month, we reported that the Pecos League announced that they would be moving a team to Amarillo. The new team, the Amarillo Lone Stars, were planning to play at Potter County Memorial Stadium.

That deal has fallen through. According to the Amarillo Globe-News, the stadium will be leased to a private high school baseball team starting in January.

The commissioners’ decision Monday means the Pecos League — a 12-team independent league baseball organization — is out of contention to lease Memorial Stadium from May to August, as was their original intent, said Potter County Judge Nancy Tanner.

“The Pecos League is out,” Tanner said. “That was part of what Mr Elliston wanted was a sublease (with the Pecos League). But the motion was made by commissioner (Mecry) Murguia to omit the Pecos League, specifically, and let Mr. Ellliston keep the additional year he has the contract and sublease to San Jacinto Christian Academy as well as the Great Southwest Collegiate League.

The Amarillo Globe-News also contacted Andrew Dunn about the decision:

Pecos League commissioner Andrew Dunn, who attended a Potter County commissioner meeting back in November, said Monday in a phone conversation he was disappointed in not having the chance to play at Memorial Stadium in 2016 . Dunn said, “the future of baseball in the Pecos League is in Canyon.”

Based in the Houston-area, Dunn said he has four teams in California set to play for 2016, giving him 12 teams for the Pecos League. He said negotiations are underway with West Texas A&M to lease their artificial-turf field, and he hopes to have a team in Canyon “for the 2018 season.”

Although Dunn is quoted as saying that he will have four California teams set to play for 2016, we are assuming that he meant for the 2017 season since there is less than a month left in 2016. However as of right now, only two California teams are listed on the Pecos League official website. 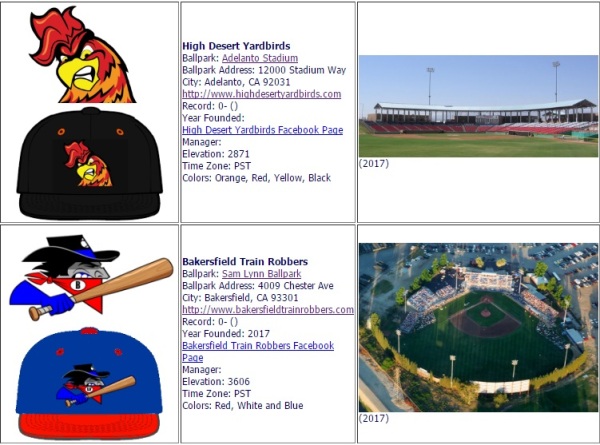 It appears as though the Topeka Train Robbers (who were set to move to Amarillo) will now be called the Bakersfield Train Robbers.

Today, the league announced that there will be a team in Adelanto, California. The High Desert Yardbirds are set to play at Adelanto Stadium next year.

The Pecos League will partner with the San Bernandino County Fairgrounds who will manage/oversee gameday operations of the team.

The SBC Fair is excited and proud to partner with the Pecos League to bring the return of quality, professional baseball to the High Desert. “The High Desert has a long tradition of professional baseball, and the expansion into the Pecos League is the next step in continuing that legacy. We look forward to building the Yardbirds into one of the leagues top franchises, and continuing to provide baseball fans in the High Desert an exciting, fun professional sports opportunity, close to home said San Bernardino County Fair C.E.O. Geoff Hinds. The Fairgrounds will oversee gameday stadium operations and partner with the Pecos League to provide in game an on field, non baseball entertainment.

Pecos League Commissioner and Owner Andrew Dunn “We are excited to play the 2017 season in High Desert, I believe it will fit perfectly with the other cities in the league. We look forward to working with SBC Fairgrounds and the City of Adelanto. Adelanto Stadium will continue our mission to upgrade facilities in our league.”

Currently, the league stands at 10 teams (the same as last season), but it appears as though both the Topeka and Great Bend teams have been converted to the two new California teams.

If Dunn’s statement to the Amarillo Globe-News is correct, two more teams in California should be announced soon. We will report on those when official information becomes available. (Unofficial schedules show teams in California City and Monterey, but neither have been announced by the league.)

Note… no mention is made on how teams with such low budgets and pay will be making these long road trips to and from California. Although if the unofficial schedules are correct, it appears as though the California teams will be playing each other the majority of the season with only a few of the other teams making the trip.