Big changes are coming to the Frontier League this season.

New teams are finally getting a chance to debut in the Frontier League this year. Back in 2020 (before COVID canceled the season), the Frontier League merged with the CAN-AM League and announced that three new Canadian teams would be joining the Frontier. Then last year, travel restrictions forced the three teams to merge into one, Equipe Quebec, for the 2021 season.

With restrictions lifted, all three teams – Québec Capitales, the Trois-Rivières Aigles, and the Ottawa Titans – will be playing in the league this season.

Then in an unexpected turn of events, The Southern Illinois Miners owners ceased operations after 14 years. This forced the league to add a travel team, the Empire State Greys, that will be owned and operated by the Empire League.

Games will be broadcasted on a new platform this year. The league announced that they are making a switch over to FloSports for all Frontier League teams and games this season. Read the official press release HERE for more information on the new streaming deal.

The All-Star game will also return this year. The game will be held in Washington, PA with multi-day celebration that includes: a celebrity softball game (Saturday July 16th), IWC Pro Wrestling event (Sunday July 17th), the Eli Young Band in concert (Tuesday July 19th) and finally concluding with the All-Star game on Wednesday. For more information or to purchase tickets, check out the press release HERE.

In addition, BaseballCloud and Yakkertech will be providing player analytics. “[They] will work with the Frontier League to bring live data to fans, starting with metrics on scoreboards and TV broadcasts and growing into in-stadium mobile apps and games. Future projects include broadcasting and instant replay enhancements, umpiring solutions, player biomechanics capture, and virtual reality experiences.” For more information about the partnership, check out the official press release HERE.

Finally, all of these changes deserve a new look for the league and its branding. The Frontier League announced a new website including a new statistical platform and as well as new logos.

The new website and statistics will be provided by PrestoSports.

The league also unveiled a new logo that includes both the Canadian and American markets. “The new Frontier League logo, created by Brian Gundell Design, features patriotic symbolism representing both the Canadian (red) and United States (blue) markets.  The compass logo displays the navigation of new, unchartered territories, while the upward direction is indicative of the League’s always forward-looking approach.”

This year, the Can-Am and Frontier Leagues are coming together for one All-Star game, hosted by the Rockland Boulders on July 10th. 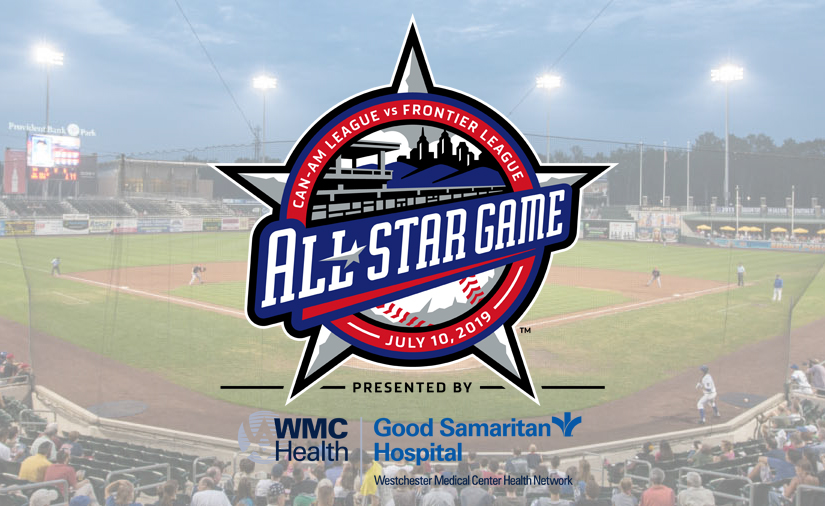 Both leagues have officially announced their All-Star rosters for next week’s game.

Rockland County, N.Y. – The Can-Am League announced its selections for the 2019 All-Star Game, which will be hosted by the Rockland Boulders at Palisades Credit Union Park in Rockland County, N.Y. All-Star Week events, presented by Good Samaritan Hospital, start on Tuesday July 9 with an 11:00 a.m. luncheon, with the Home Run Derby to follow at 7:30 that evening. On Wednesday, July 10, the Can-Am and Frontier Leagues square off for the first time ever with game time at 7:00 pm.

A total of 26 players comprise the roster for the Can-Am League, with the defending league champion Sussex County Miners placing eight, followed by Rockland and the New Jersey Jackals (5 each), the Trois-Rivieres Aigles and Ottawa Champions (3), and the Quebec Capitales (2). Sussex County Manager Bobby Jones will lead the squad on the heels of his crew’s first ever Can-Am League championship in 2018.

For the first time, one player from each of the Can-Am’s six teams was selected from a pool of nominees by fan balloting and input from managers. That group includes: Conrad Gregor (New Jersey), Jiandido Tromp (Ottawa), Ryne Birk (Rockland), Ryan Newell (Sussex County), and Garrett Mundell (Trois-Rivieres). Quebec’s Karl Gelinas was also selected but is unable to participate due to injury. The veteran hurler will be in attendance, however, as he was named Honorary Team Captain and Pitching Coach for the contest.

“The Can-Am League couldn’t be prouder that we are hosting the Frontier League in the 2019 All-Star Game,” noted Can-Am Executive Director Kevin Winn.” They bring 27 years of tradition with them as the oldest continuously operating independent league. I want to thank Commissioner Bill Lee, all the owners, executives, coaching staff and players. Two premier leagues are facing off in a premier ballpark.”

Lee is in his 26th season as Frontier League commissioner. Lee will oversee a cross-league All-Star Game between the two circuits for the first time in history.

“We are extremely pleased and excited to be playing the Can-Am League All-Stars,” Lee said. “Everyone is looking forward to coming to the New York area. This is an unprecedented game for our League. We want to thank all of the owners, teams and Kevin Winn for making this possible. Above all, we want to thank Shawn Reilly and the entire Rockland Boulders staff for their hard work.”

Reilly, president of the Rockland Boulders, will be the host of this year’s event. “It is exciting that the best young talent in professional baseball is coming to New York City, the baseball and media capital of the world, to showcase our leagues,” Reilly said. “We are proud to host this historical matchup in our beautiful Palisades Credit Union Park and give our fans an event they will never forget.” Tickets for all All-Star Week events are available at rocklandboulders.com, or call 845-364-0009 for more information.

In a collaborative effort, members of the Frontier and Can-Am Leagues worked together this offseason to make the event possible. Can-Am Executive Director Kevin Winn acted as a critical part in the process.

“The Can-Am League couldn’t be prouder that we are hosting the Frontier League in the 2019 All Star Game,” Winn said. “They bring 27 years of tradition with them as the oldest continuously operating independent league. I want to thank Commissioner Bill Lee, President Rich Sauget, all the Owners, Executives, Coaching Staff and Players. Two Premier Leagues facing off in a Premier Ballpark.”

Bill Lee is in his 26thseason as Frontier League Commissioner. Lee will oversee a cross-league All-Star Game for the first time in independent history.

“We are extremely pleased and excited to be playing the Can-Am League All-Stars,” Lee said. “Everyone is looking forward to coming to the New York area. This is an unprecedented game for our League. We want to thank all of the owners, teams and Executive Director Kevin Winn for making this possible. Above all, we want to thank Shawn Reilly and the entire Rockland Boulders staff for their hard work.”

Shawn Reilly, President of the Rockland Boulders, will be the host of this year’s event.

“It is exciting that the best young talent in professional baseball is coming to New York City, the baseball and media capital of the world, to showcase our Leagues,” Reilly said. “We are proud to host this historical matchup in our beautiful Palisades Credit Union Park and give our fans an event they will never forget.”

“It’s truly an honor to represent the Frontier League in the All-Star Game and even more so with our All-Stars playing against another league’s All-Star team,” Pelfrey said. “I’m excited about the opportunity to showcase our best players so we can elevate the already positive reputation of our league.”

The game will be played between representatives of the Frontier and Can-Am Leagues for the first time in history. Its unique dynamic offers a new and unique perspective across the independent professional scene.

“I believe this dynamic of an All-Star Game between two leagues can really provide opportunities and information for future players when choosing to play independent baseball,” Pelfrey said. “This All-Star game will show the competition level of both leagues and exactly what independent baseball is about. The electricity in the ballpark that night is going to be something you shouldn’t miss!”

Pelfrey will work with a number of familiar faces, as a League-leading six Freedom are recognized as Frontier League All-Stars. The Evansville Otters and Southern Illinois Miners are second with four, the River City Rascals have three, while the Schaumburg Boomers, Washington Wild Things, Joliet Slammers and Gateway Grizzlies have two. The Windy City ThunderBolts and Lake Erie Crushers have one representative, respectively.

The Freedom’s Austin Wobrock, who made this sensational playearlier in the year, earned his second All-Star nod. The shortstop is hitting .275 on the season with seven doubles and nine stolen bases.

Gibson is an All-Star for the first time with his 2.76 ERA across seven starts and two complete games. Left-hander Castellani will attend his first All-Star Game as well following an impressive 2.25 ERA across 52 innings.

Both Tripp and McKenna are tied for a team-lead in appearances with 15. McKenna leads his team among relievers in strikeouts with 26 over 16.2 innings, while Tripp has yet to allow an earned run in 19 innings. It will be McKenna’s first All-Star appearance. It will be Tripp’s second consecutive All-Star season.

The Otters will send first baseman Carlos Castro, third baseman Ryan Long, catcher Rob Calabrese and relief pitcher Taylor Wright to New York. It will be the first All-Star game for Castro, Calabrese and Wright. Long will attend for the second consecutive season.

Calabrese is in his first Frontier League season after spending two years in affiliated ball with the San Francisco Giants. He is hitting .292 with an .897 OPS through 29 games. Castro, meanwhile, has six home runs in his second Frontier League season. Wright, a right-handed pitcher, has struck out 30 compared to six walks in 24.1 innings and sports a 1.11 ERA to go along with his four saves.

Cunningham earned his second All-Star nod thanks in part to his League-leading 59 innings pitched accompanied by a 2.90 ERA. Flete (.388) and Wawoe (.331) rank first and second in the Frontier League in batting average, while Cosgrove (.319) ranks first among catchers in batting average. The three aforementioned will be making their first All-Star appearances.

Trevor Achenbach, Braxton Martinez and Kameron Esthay will represent River City as All-Stars for the first time in their respective careers. Achenbach is fourth in the Frontier League in batting average at .314. Martinez has walked nearly as much as he has struck out this season (28 BB/32 K) and has powered his way to 12 doubles and six home runs. Esthay, meanwhile, is hitting .284 with 13 doubles and a .794 OPS.

Washington’s J.J. Fernandez and Hector Roa are All-Stars for the first time as well. Fernandez is among the most productive bats in the Frontier League, as the 25-year-old is slashing .291/.382/.473 with five home runs, eight doubles, two triples, 23 RBI and 22 walks. Roa ranks second with 30 RBI and owns a .285 batting average and .494 slugging percentage.

Schaumburg will send catcher Nick Oddo and closer Connor Eller to the All-Star Game. It will be Oddo’s second selection and Eller’s first. Oddo leads his Boomers with a .311 batting average and 10 doubles. Eller leads the League in saves with nine and owns a 1.80 ERA over 20 innings pitched.

The Grizzlies have two first time All-Stars, featuring outfielder Shawon Dunston Jr. and reliever Dakota Smith. Dunston Jr., who is batting .271 through 35 games, is tied for second in the League in steals with 16. Smith, in his fourth season in Gateway, has 33 strikeouts in 21.2 innings pitched.

Joliet’s Chaz Meadows and Daren Osby also earned All-Star bids. Meadows is now a two-time All-Star, while Osby will partake in his first. The right-handed throwing Osby is averaging a strikeout per inning over 40.1 on top of his 2.67 ERA. The shortstop Meadows is tied for the team lead in hits with 40.

Left-handed starter Patrick Ledet will represent Lake Erie as their lone All-Star. Ledet ranks third in the League in ERA at 1.90 and has struck out 48 compared to nine walks in 52 innings pitched. It will be Ledet’s first All-Star appearance.

Rounding out the Frontier League All-Star roster is Windy City right-hander Tyler Thornton. Thornton boasts a 2.81 ERA through 32 innings pitched and is a first time All-Star.