Indy Ball Island made the drive to Nicholasville, Kentucky for the Thoroughbred Baseball League’s Opening Day on June 6th.

The league, which is comprised of six teams all at the same stadium, is playing a hybrid schedule throughout the season.  Games will be played with staggered start times on two of the fields at the complex. Weekends will also feature double headers for each team  – so on those days, fans can see six different games while at the ballpark.

The league has to make the most of using one facility for more than 50 games per team over 60 or so days.

If that sounds a bit confusing, don’t worry… you’re right. It can be confusing for everyone involved at first. For opening night, two games were going on at the same time while the teams for the third game waited around until one of the other fields cleared out.  The third and final game didn’t start until 10:50 pm and finished at 2:05 am.

Clearly, there needs to be some adjustments with the time and scheduling of games, but I am confident that it will all be resolved over time. Opening Night of a start up league isn’t going to go perfectly, but they can learn a lot from it.

Each field has its own set of seats behind home plate, but for fans who want to see both games, there are bleachers towards the outfields where you can see most of the action on both fields. I spent most of my time walking between both sets of bleachers as I wanted to see as much as I could. 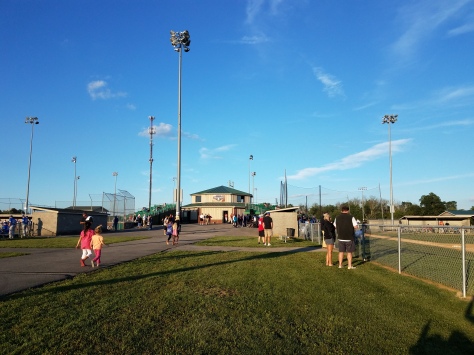 Another downside that kept popping up with the two field configuration is that foul balls from one field can reach the other playing field. There were many times when one game had to yell “heads up!” to the other game.

Hiccups are to be expected in any new venture. The second game’s scoreboard wasn’t on, and stats haven’t been uploaded to PointStreak just yet.

Attendance was under 100, and it seemed as if marketing and promotion in the area has been minimal. I am sure that will also improve over time.

Don’t let any of those issues scare you or make you stay away from this league. I truly believe that the issues here will be resolved with a little bit more time and running.

Dallas Murphy, owner and operator of the Thoroughbred League, has the foundations for something really great here in Kentucky.  And best of all…. he’s doing it for the right reasons.

In just one day talking to Dallas and seeing him in action, I can tell that he really cares about the players and believes in what they are doing here. He wants these players to have a safe place to play, get better and put up stats. The fields (which are a hybrid of turf and dirt) are nice and the complex as a whole is a very nice place to watch baseball. One thing he also made sure of before starting this is that all of the players have a place to stay, paid for by the league – something that is very uncommon in the lower levels of indy ball.

And yes, this league is definitely in the lower levels of independent baseball. Most players have experience in the Pecos League, Empire League, or the United Shore League. There are few former higher level independent and affiliated players, but also many who are just finishing their college career. The age range varies between lower 20’s up to 40.

But make no mistake about it, the playing level is competitive, and there are very talented players in this league.

The results for Opening Night were:

I just want to thank Dallas Murphy, the Thoroughbred staff, managers, coaches and players for their hospitality on Opening Night. Thank you so much for inviting me and allowing me to be a part of such a special day for everyone involved.

I had an amazing time and cannot wait to come back to see how much it grows during the season.

To all of the players who came up to me and made me feel like a celebrity, thank you. I do this site for you!

Last week, Indy Ball Island posted a Q & A with the Thoroughbred League.  During the interview, Dallas Murphy (the owner/commissioner) stated that the tryout would cost $590 for each player.

Many interested players inquired about the fee, and Murphy responded with an update.

The tryout fee must be paid by each player and will cover only the tryout.  They do intend to feed the players several meals during the day as well as provide Gatorade and water during the tryout camp.

However, the league announced that each guy who makes a team will be refunded this camp fee on their first payroll distribution.

Make a team (one of 150 spots), and you get your tryout money reimbursed.

Murphy has been very insistent that they are trying their best to make this league run smoothly with the players’ best interests in mind.  If this all works out the way they plan, it will be a great thing for the signed players. He has also been very helpful and willing to answer any and all questions.

The league plans on making a few more announcements in the next ten to fifteen days as well.

For more information about the Thoroughbred Baseball League, visit their official website HERE.