At the beginning of the season, Indy Ball Island reported about the partnership between the MLB and the Atlantic League. This partnership included experimental rules that the MLB wanted to try, but didn’t want to implement in their own minor league system.

Now, they have announced additional rule changes for the second half of the season, starting tomorrow (July 12th). 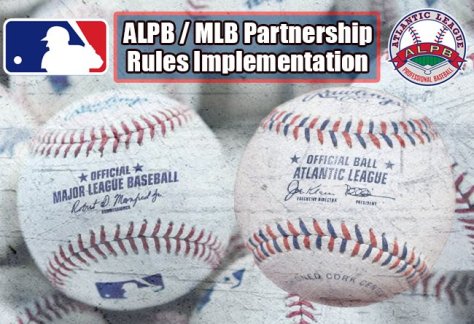 Four new initiatives to debut in Atlantic League games beginning Friday, July 12
(Lancaster, Pa., July 11, 2019) – Major League Baseball (MLB) and the Atlantic League of Professional Baseball (ALPB) announced today four additional experimental playing rules that will be in place during the second half of the 2019 Atlantic League Championship Season. The list of changes is as follows:

These new experimental playing rules will be used along with the current rules and equipment changes that were put in place at the start of the 2019 season. These include:

MLB will analyze the effects of these changes before deciding on potential additional modifications for the 2020 ALPB Championship Season.

The experimental playing rule and equipment changes are part of a new three-year agreement between MLB and ALPB. The agreement covers the transfer of players from ALPB to MLB and enhances MLB’s scouting coverage of ALPB games. MLB will continue to provide statistical and radar tracking data from ALPB games to MLB Clubs.

“We have seen a tremendous amount of interest in these initiatives from our players, coaches and fans throughout the first half of the season,” said Rick White, ALPB President. “We look forward to working further with Major League Baseball and observing these additional rule changes in action throughout the remainder of the year.”

About the Atlantic League of Professional Baseball (ALPB)

With eight teams in the Mid-Atlantic and Texas, the ALPB is a leader in baseball innovation and a player gateway to Major League Baseball. Through its exclusive partnership with MLB, the Atlantic League tests Major League Baseball rules and equipment initiatives. The Atlantic League has sent over 900 players to MLB organizations while drawing more than 40 million fans to its affordable, family-friendly ballparks throughout its 22-year history.