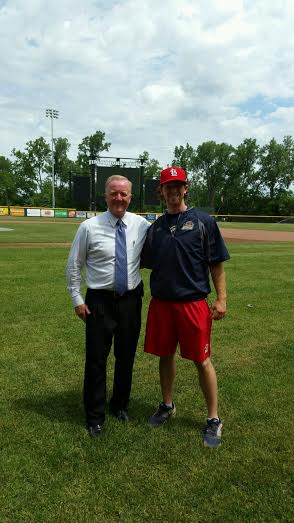 UTICA, Mich.—The St. Louis Cardinals have signed United Shore Professional Baseball Leagues’ (USPBL) Ross Vance. Vance, a left-handed pitcher with the Birmingham Bloomfield Beavers will report to a St. Louis Cardinals Class A affiliate on Thursday, June 16, 2016. He is expected to join the Cards in either the Gulf Coast or New York Penn League.
The first USPBL player signed by a Major League team, Vance distinguished himself with the Beavers as a high-percentage strikeout pitcher with the ability to change speeds and keep hitters off balance. He compiled a 1-0 record with the Beavers, while posting a 0.00 ERA. Signed out of West Virginia University, Vance was 7-5 in his senior year, striking out a team-best 81 batters while allowing 35 earned runs on 48 hits for a 3.26 ERA.
Said USPBL’s Executive Director of Baseball Operations Brian Berryman: “The philosophy of this league is to get the best players overlooked by Major League Baseball and then do everything we can to make them better and signed by a Big League organization. We couldn’t be more pleased.”
The USPBL’s inaugural season began on Memorial Day 2016 and features the nation’s top baseball talent recruited to three initial teams: The Utica Unicorns, Eastside Diamond Hoppers, and the Birmingham Bloomfield Beavers.
“I loved being a part of the United Shore Professional Baseball League, in particular the coaching, mentoring and level of competition,” said Vance. “Any young player looking to get better and further their career should make this league their first priority.”

2 thoughts on “USPBL Player Signs With The Cardinals Organization”