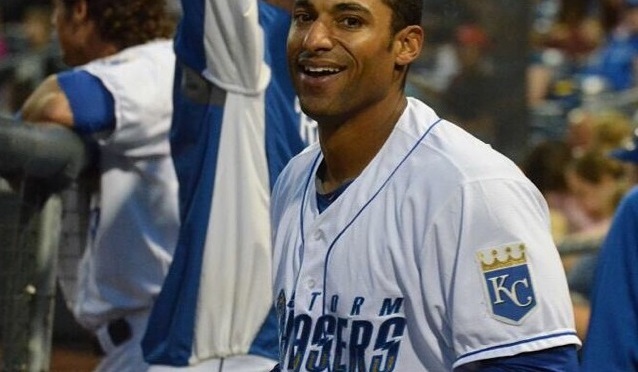 Current Kansas City Royals AAA prospect Matt Fields makes crushing home runs and getting on base look easy for the Omaha Storm Chasers. However, many people don’t know the long and often difficult road that has led him to this point in his career. Drafted by the Tampa Bay Rays in 2004, Fields spent six years in the organization. With the Rays, he reached as high as AA before being released in 2010.

After his release, Fields took his talents to the independent Frontier League. He spent the entire 2011 season with the Southern Illinois Miners;  However, Fields soon learned that independent baseball is a whole different world than affiliated ball. Although he had a great season, hitting .272 with 17 home runs in 57 games, he realized that independent ball can make a player feel stuck and complacent. There are many players who know that they aren’t going anywhere else, so they have a “whatever” attitude.  Those players do whatever they want and don’t play with as much drive and desire as players in an affiliated organization.

Feeling fed up with baseball and trying to please his then- fiancée, Fields started losing his love for the game. After the 2011 season, he decided to retire from baseball and take a job as a baggage handler at the Seattle-Tacoma Airport.  He found out pretty quickly that loading luggage or working a normal 9-5 wasn’t something he was ready to do. He wasn’t ready to give up his childhood dream just yet.  If he did, he knew he would regret it for the rest of his life. His friends and family, especially his mother, encouraged him to give baseball another shot. He was too young and too talented to just give up.

When the 2012 season rolled around, he left that normal life behind and returned to the Southern Illinois Miners.  This time, Fields decided that he was going to make the most out of his second chance. He wanted to just go out there and have fun again. No matter what happened, he planned on making it a year to remember. 31 games into the season, the Royals saw something special in Fields and purchased his contract. He was sent to high-A Wilmington where he finished the season hitting .281 with 17 home runs and had one of the most memorable years of his pro ball career.

He spent the 2013 season crushing home runs with the AA Naturals in Northwest Arkansas. He was named a Texas League All-Star, won the home run derby, and set the single season home run record (31) for the Naturals.  After that stellar year, Fields played the entire 2014 season in AAA Omaha with the Storm Chasers.  Here, his power continued. He hit 28 home runs while batting .262 for the Pacific Coast League champions.

2014 was a big year for him off the field as well. On May 13th, Fields was married to Elizabeth Elizalde Fields. Through all of the ups and downs with baseball and life, she has been his source of happiness while being his rock and supporting his dreams.

Fields has just re-signed with the Royals and has been invited to his first Major League spring training. Currently, he is playing Winter Ball for the Estrellas de Oriente in the Dominican Winter League with a .238 average.

Fields is just one step away from the major leagues with the Royals. It hasn’t always been an easy road, but he wouldn’t change it for anything.  When asked if he has any regrets about returning to baseball, he simply said “none. At all.”

6 thoughts on “From Baggage Handler to Miner to Storm Chaser, Matt Fields is Now Trying to Become Royal”