Then there’s the indy ball grind.

And then… on a whole other level… you have the Black Sox grind.

I was fortunate enough to experience this first hand when I was invited to spend two days with the “Road Warrior” Black Sox.

The team, who is currently in the middle of their spring training schedule, played two exhibition games in Washington, PA (practically my “hometown”) this week.

I’ve known Joe Torre, the Black Sox owner/manager, for many years thanks to this website and the fact that we generally run around with the same circles in baseball. He told me that he would love for me to come out, support the guys, and get the full Black Sox experience. The full experience, as it turns out, allowed me to be in the clubhouse and in the dugout during the games.

And what an experience it was. 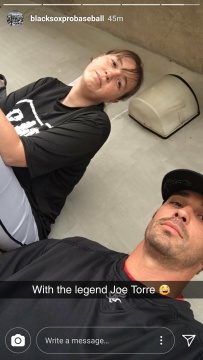 As we said our “see you laters” after the game yesterday, Joe turned to me and said, “Are you finally sold yet?”

I was always sold on the Black Sox idea. Their “change the culture” mentality is something that I want to see happen in indy ball. But I’ll admit that before the past two days, I had bought the product but still kept the tag and receipt. Now, I’m completely in. The tag and receipt have been thrown in the trash, and I’m not looking back now. 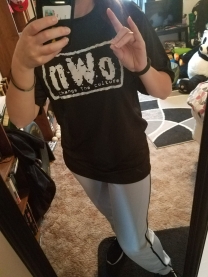 If you’ve never read my previous post(s) or heard of the Black Sox, let me try to sum up who they are…

When you think of the Black Sox, think of a good old fashion barnstorming baseball team. The  team is made up of unsigned players who travel around the country playing various indy ball teams during their spring trainings.  Their hopes are that a manager somewhere along the way will like what they see and want to sign them for the upcoming season.

The Black Sox like to say “we are not for everyone” and that is absolutely true. The barnstorming life is brutal. Some times they are given a hotel to stay at when they’re in town, but other times they have to find their own place to stay, whether it’s with a host family, a friend they know, or paying out-of-pocket for a hotel room. The guys then drive themselves from city to city with their cars filled to the max with people and bags.

The guys played two morning games in Washington, PA (May 3rd and 4th) and then, when their game ended after 1 PM on Friday, they drove straight to Florence, KY (over a 4 hour drive) to play ANOTHER game starting at 7.

They are the true definition of baseball grinders, but of course, it’s been that way for most of them their entire careers.

I could tell you their stories, everyone in indy ball has one, but they know that’s not important.  Failed draft picks, injuries, small town colleges, scammed indy leagues, near meaningless stats from low-level indy leagues… every guy has had something lead them to this team. No one is going to care about your story here.

The players all play with a chip on their shoulder and have an “us against the world” mentality. When you realize just how cutthroat indy ball is,  you can’t blame them. The Black Sox have an “NWO” wrestling theme. They want to come in, be the renegade group, take over, and succeed. They want to “change the culture” of what independent baseball is all about.

In the highly competitive world that they’re in, it would be easy for the guys to care more about themselves than the team.  Essentially they ARE competing against each other for a job. But the guys know that they can’t think like that. You have to be a TEAM and put the team first before your own individual stats. Playing as a team will eventually bring the individual notoriety if you deserve it.

After spending the last two days with the team, I can honestly say that the majority of the guys understand that. They’re sold and have already thrown away the tag and receipt.  There are still a few that bought in, but aren’t completely sold yet. And the truth is, they’ll either figure it out, or they’ll eventually fail… at least in this system.

These past days have been an eye-opening experience to say the least. I’m sure on the first day, most guys had no idea why I was in the clubhouse and dugout. The few guys that I’ve known over the years welcomed me in with open arms, but the others were apprehensive. I was a bit apprehensive on that first day too. I layed low in the manager’s office in the clubhouse pregame and was more a fly on the wall in the dugout than a part of the team. 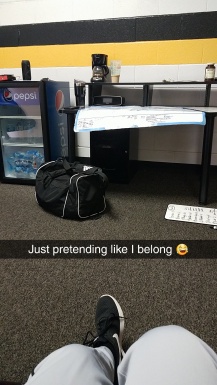 But by the second day, I definitely felt like I belonged just a bit more. I started talking to the guys and got to know a little bit more of their stories. I could see the passion in their eyes when they talked about the game. I was standing on the railing with them and cheering for their victories, however small they were, during the game. 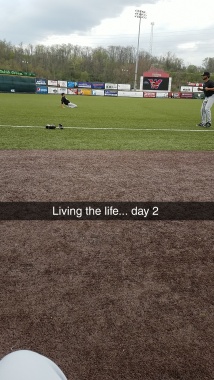 Over the last three years, I’ve watched this team from the other side of the wall. The last two years were rough to say the least. They couldn’t compete, and they knew it. This year, however, I was able to see a team that was very much improved from the last few years. They came in and were competitive. They lost both games, 6-5 and 5-3, but they competed and really, that was a win itself. Players proved that they belonged on that field. They put themselves in a position to be seen, and that’s all they can ask for at this point.

Seeing them leave it all out on the field, coming in the dugout and the clubhouse giving each other advice, putting in extra work after games, watching video… that’s what sold me.

Guys, thank you for letting me into your world for the last few days, even though I know some of you probably didn’t think I should be there.

Please know that you guys have my utmost respect. It may have only been two days, but I want you guys to succeed more than most people ever will. You give it everything you have just for that chance to keep playing.

I see that. I believe in you.

The 2017 Frontier League season marks the 15th anniversary for the Washington Wild Things.

On Friday, the team won their 800th game in franchise history.

On Saturday, the team clinched a playoff spot. 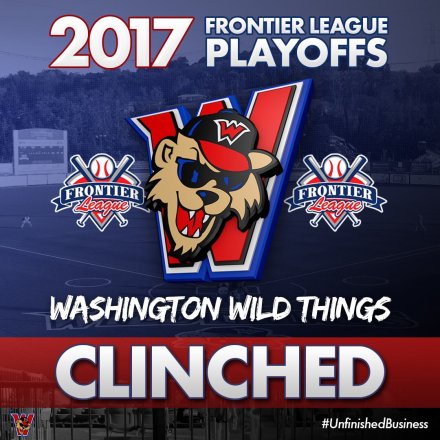 All season long, I have struggled with what direction to actually take this anniversary post.

At first, this was intended to be a “Where Are They Now” post highlighting the players and coaches that have been through Washington, Pennsylvania in the last fifteen years. That may still happen, but not today.

Then, I thought I would put a more personal spin on the article… I’ve literally grown up with the Wild Things and have seen it all.

When the team relocated from Canton, Ohio to Washington, I was a 12 year old kid who looked up to the guys on the field and loved being much closer to the action than I could imagine in Pittsburgh with the Pirates.

After awhile, I was the same age as the players, forming friendships that have lasted well after the guys have left this town to begin the next chapter in their lives.

This year, I’m at veteran status. I’ve hit the Frontier League age limit of 27. I’ve been called the “Mama Bear of Indy Ball” although I’d prefer just being called the big sister or something along those lines… I’m not at Mama Bear age status yet!

But yes, I am very protective and proud of these guys on the team here in Washington. 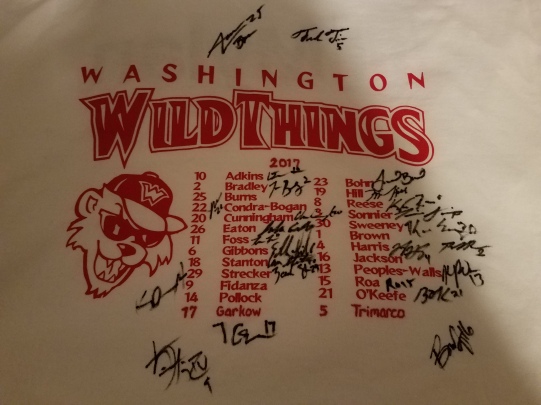 This year, this team has been something special, and they deserve all of the recognition in this article. On and off the field, this has been a one of a kind group that I’m honored to call “my team.”

The theme for the year has been “unfinished business”, which is really appropriate for the team (this year and over all 15 years) as well as for a lot of the players.

The Wild Things have been in the league for 15 years without ever winning a championship.  In fact, they haven’t even been in the championship series since 2007 and haven’t had a playoff appearance at all since 2014.

Last year, a lot of the pieces were there, but the team just couldn’t finish out the season successfully.

Roster turnover is very high in indy ball. Washington is no different – only five players currently on the roster were with the team last year, but those players have had a huge impact this year. Three returning players are starting pitchers (Trevor Foss, Chase Cunningham, and Brian O’Keefe), solidifying the rotation from the start, and the other two returnees are their backstops (Kyle Pollock and John Fidanza).

The rest of the players have some unfinished business of their own. At mid-season, the Wild Things had 14 players with affiliated experience on their roster (the second highest in the Frontier League).

This season has also brought a lot of records for the Wild Things. In addition to winning their 800th game in franchise history on September 1st, the team sent a record eight players to the All-Star game this July. 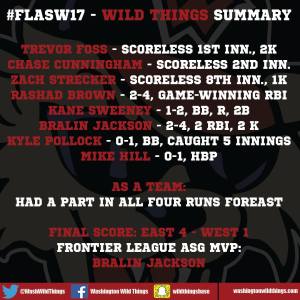 On June 30th, Foss set a franchise record of his own when he pitched his 10th career complete game (and has pitched 2 more since). 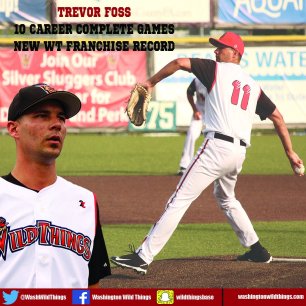 The team also had a Frontier League pitcher and player of the week this season. 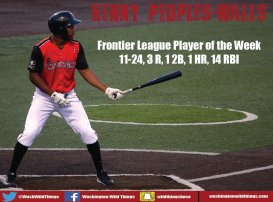 On August 31st, the Frontier League announced their postseason awards which brought four more honors to the Wild Things organization.

Rashad Brown won the Fran Riordan Award. This award is given to one player each year that exemplifies good citizenship off the field and in his respective community.

First baseman, Kane Sweeney,  was also named to the postseason All-Star team. He is currently batting .296 with 15 HR and 61 RBI.

The WildThings have accomplished a lot in this anniversary season, but as the theme goes… there is still unfinished business to take care of.

The team will begin their playoff run at home on Tuesday and Wednesday. From there, they hope to become the first team to bring a championship to Washington, PA.

And… just like every year for the last 15 years, I’ll be there in the stands.

But this time, I know it’s different. We all have some unfinished business.

To the players, managers, and coaches who have come through here in the past, thank you for bringing us to this point. For fifteen years, you guys have taken over my summer and helped me create memories and friendships that I will cherish for the rest of my life.

To the players from this year’s team, you know how much I love you boys! Thank you for being the amazing guys that you are… on and off the field! I respect and admire you all. Let’s finish this!