Last off season, we highlighted many independent leagues that were looking to start in 2015.  First up were the Mount Rainier Professional Baseball League (MRPBL) and the East Coast Baseball League (ECBL). Then came word of one (and then two) leagues in the Ozark, Missouri area – The Heartland of America Baseball League and The Ozarks Pro Baseball League.

Sadly, none of them were able to have an entire season in their original form. During the summer, we recapped what happened to each;  The MRPBL played for a couple of weeks but ultimately folded. The ECBL never played a game, but it was resurrected by one of the team’s owners as the North Country Baseball League. They played a full season and had some players promoted although there were still many issues to overcome due to how quickly it had to be put together.  And Ozark, Missouri didn’t see any professional baseball games this summer as neither league could work through problems to field teams.

To say the least, this summer was not a good one for independent baseball from a new league standpoint.

But as the temperatures are starting to drop, the off season and rumors of new independent leagues are just heating up.

So far, we have heard of four leagues working on debuting in 2016 – The United Shore Professional Baseball League (USPBL), The Empire League, The Desert League, and the U.S. Baseball League.

Last month, we had a Q & A with the USPBL’s Executive Director of Baseball Operations which you can find HERE. The league is looking to field three teams that will all play in the same stadium (that is currently being built) in Utica, Michigan.

The Empire League is a continuation of the North Country Baseball League. Eddie Gonzalez, who was an essential part of the NCBL, will operate as the Empires League’s Director of Baseball and Business Operations. The league will be returning to Old Orchard Beach, Maine and Watertown, New York as well as bringing new teams to Albany and Rome, New York. We are working on getting an interview with Eddie soon!

The Desert League and the U.S. Baseball League have been quieter about their 2016 plans.

The Desert League will be looking to field teams in Arizona and California for a season that runs from August through October. Their website states that:

The Desert League of Professional Baseball is a fall Independent League that will begin its inaugural season in August. The season will run from August until October with each team playing about 60 games.  All of our players will be paid.  No player will pay to play in our league.  This is true professional baseball.

We are catering to the first year pro player.  Our goal is to help players get their foot in the door of professional baseball, there for we have adopted roster rules that require each team to carry 12 rookies. If you are looking for a place to start your professional career look no further.

I have been in talks with members of the Desert League staff and will release more information as well as a Q & A when the league has officially set their plans.

And finally, the U.S. Baseball League is looking to bring baseball to Ozark, Missouri the right way. In August, we reported that Price Cutter Park in Ozark had been purchased. It appears as though that will be the future home of the U.S. Baseball League. They are working hard to get the field ready for baseball in the near future. We will also have more information when it is released as well as a Q & A with the league before the season begins.

Please remember to subscribe to Indy Ball Island to keep up with all the off season news!

After all the drama that happened between the Heartland Of America Baseball League and the Ozarks Pro Baseball League this summer, little hope was left for baseball returning to Ozark, Missouri.

However, that may all be about to change.

According to the CC Headliner, two businessmen, Jeff Williams and Joel Benenson, closed on a deal for Price Cutter Park on August 10th.

Price Cutter Park had previously been discussed for use by both failed indy leagues, but a deal was never reached between either of the two leagues and park owner, Horn Chen. 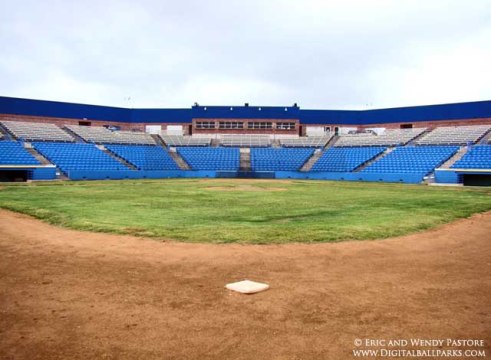 After purchasing Chen’s company, OMS, LLC, Williams and Benenson then entered into a deal with the Ozark Board of Aldermen to bring a baseball league to the town next spring. Since the opening of the park, Chen had owned the stadium, but the city owned the land the stadium sat on.

In a 5-1 decision during a special emergency meeting at 6:15 p.m., Aug. 10, the aldermen agreed to accept the donation of the stadium and all of its improvements to the city and to enter into a 15-year “triple net lease” that makes the stadium available to the company for $1 a year for the first five years and $60,000 annually for the next 10. OMS, LLC remains responsible for the complete maintenance and operation of the venue.

The agreement also allows for the tenants to deduct real estate tax payments due now from the last payment made in 2030.

Brett Roubal (attorney for the new owners) appeared before the board Monday on behalf of the company, saying that Williams and Benenson are committed to bringing baseball back to Ozark and to answer any questions.

Ozark’s mayor, Rick Gardner, is excited for the future and said that this was exactly what needed to happen.  After more than a decade of Price Cutter Park being without a professional team, ever since the Springfield-Ozark Ducks played their last season in the Frontier League in 2004, there will be baseball back in Ozark, Missouri.

This deal is much more solid than any that was proposed earlier in the year, and hopefully much more promising for the return of baseball.  Williams and Benenson have extra incentive to make this league work.  Both men have sons who were slated to play in one of the failed leagues there this summer.

They hope to have their season begin in March 2016.

More details about baseball returning to Ozark, MO will be provided in the upcoming months. Please subscribe to Indy Ball Island to get any further updates.