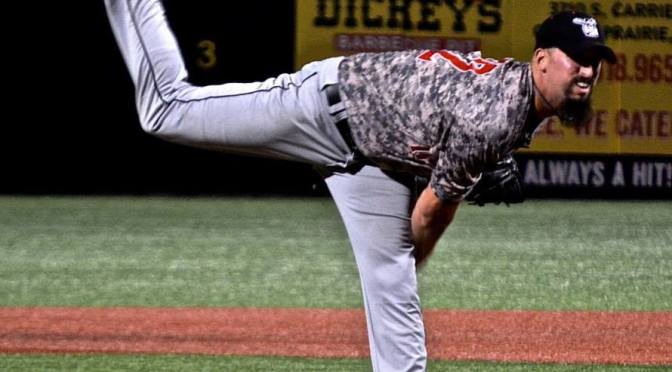 The Pirates recently signed pitcher Chris Peacock from the American Association. This league just so happens to be the same one that John Holdzkom was found in during the season.  So… a pitcher from the independent American Association signed by the Pirates? Sounds like the beginnings of a familiar story, but that is where the similarities stop.

John Holdzkom was in the independent ranks to REVIVE his career after a few chances in affiliated ball. On the other hand, Chris Peacock was in the independent ranks to HAVE a career.  He has never been drafted or played in any level of affiliated ball.  That is what makes the signing of Peacock so interesting. It is a signing that may be surprising to most, but it is very low risk with high potential. This is exactly what teams are trying to accomplish when scouting independent leagues.

Chris Peacock’s baseball resume takes a trip through four different independent leagues with six different teams in a span of only three seasons. If this blog had a poster boy for Independent League travels, Chris would be it.
He started his college career at Faulkner State CC then transferred to the University of Mobile. After graduating from the University of Mobile in 2011, he started his professional baseball career in 2012 with the now defunct North American Baseball League. His first stop was with the Abilene Prairie Dogs. After only two appearances, he was traded to the San Angelo Colts. But after two shaky performances with the Colts, he was released.

After his short stint in the North American Baseball League, Chris turned to the Pecos League where he landed with the Las Cruces Vaqueros to finish out the 2012 season. He made 10 appearances (9 Starts including 1 Complete Game) for the Vaqueros while compiling a 4.31 ERA. Next season, he stayed in the Pecos league for the entire season, but this time with the White Sands Pupfish. He appeared in 19 games, 9 of them starts, with a record of 4-2 and a 7.65 ERA.

Chris started 2014 in the United League with the Rio Grande Valley White Wings. Here he turned his career around while working strictly out of the bullpen on his way to two championship rings. In 30 appearances, he compiled a 5-2 record and a 2.27 ERA for the ULB champions. This was enough to get him noticed by the American Association. Chris joined the Wichita Wingnuts at the height of their post season push in August. He finished out the regular season with 6 appearances in relief and a 2-0 record. In the post season, he pitched in four of the six playoff games with a 2.70 ERA for the AA Championship winning team.

On October 11th, Chris finally left Indy Ball Island when the Pittsburgh Pirates purchased his contract. He is the third pitcher that the Pirates have signed from the American Association this year. John Holdzkom (who finished the season with the big league team) and Matt Nevarez (who finished in AA Altoona) also had their contracts purchased.

Will Chris build off his 2014 season and make the most of his first shot at affiliated ball? Can he pitch well enough to stay off of Indy Ball Island? Only time will tell, but it should be an interesting story to follow!