During the Frontier League season, my friend Stewart Ijames of the Washington Wild Things was just one of six players in the league who signed with the Arizona Diamondbacks organization. After the season, two more Washington Wild Things and four additional Frontier League players also had their contracts purchased by the Diamondbacks. In a span of five months, the Arizona Diamondbacks took a total of 12 players from the Frontier League, which is by far the most for any major league organization; The next closest was 5 taken by the Braves.

However, the Frontier League was not the only independent league the Arizona Diamondbacks were scouting. From May through the end of September, they also signed four players from the American Association, five from the Canadian American Association (Can-Am), and two from the Atlantic League. If you’ve lost count, that is 23 players that the Arizona Diamondbacks signed from the top 4 leagues in the indy ball ranks since the beginning of the season. The Braves came in at a distant 2nd after signing a total of 13 independent league players from those leagues during the same time frame.

Of those 23 players signed, 15 of those players were given contracts during the MiLB season and assigned to an affiliated team. The other eight players were signed to contracts after the season had ended. Currently, 13 of the 15 players are still listed as “active” within the organization. Two of these players played at the AAA level, four at the AA level, and six players spent time with the Championship winning class A team, the Hillsboro Hops. Signing players from the independent leagues is usually done to fill holes within the lower levels of an organization while trying to find a diamond in the rough who may advance all the way to the major leagues. It can offer a huge reward for very little risk.

The Arizona Diamondbacks’ coordinator of independent league scouting, Chris Carminucci, knows a thing or two about finding a diamond(back) in the rough. This year alone, three of his independent league players (Andy Marte, Bo Schultz, and David Peralta) spent time on the Arizona Diamondbacks major league roster. One player, Peralta, was a breakout star. After signing halfway through 2013 and spending the rest of the season with the class A Visalia team, he broke this year’s spring training camp with AA Mobile. On June 1st, he made his major league debut and began getting acclimated with the higher level of play. He became the Diamondbacks every day right fielder and finished the season with 8 HRs, .286 avg, .450 SLG, and a .770 OPS in 88 major league games.

David Peralta’s story is unlikely, but it is nowhere near the only one of its kind. The Diamondbacks have found some great talent courtesy of Chris Carminucci. He has managed to tap into a market that few major league organizations have done, and he has managed to do it with great success. Is there another Peralta within the 21 independent players who were signed in 2014 and are still active with the Diamondbacks? Only time will tell, but it should be an interesting story to follow.

Watching this amazing MLB post season full of games that have been anything but ordinary has made me wonder… What is your favorite baseball moment? Were you on the field, in the stands or just simply watching it on TV?

If I had been asked this question last year, I would have said without a doubt that my favorite baseball moment was being a part of the 2013 NL Wild Card crowd at PNC Park when the Pirates faced the Reds. 20 years of losing was finally over.  I was able to witness my first playoff game in person.  Since I was 2 years old the previous time the Pirates were in the playoffs, I had no idea what it was like to have a team play an important game in October. This 2013 Pirates team was the special group to change all of that. I know that I will never forget them or that feeling as long as I live. The CUETO chant will forever be etched in my memory.

However, that Wild Card game was my favorite baseball moment for all of 10 months. On a Sunday afternoon, August 24th to be exact, in a much smaller stadium, Consol Energy Park, and in front of a totally different crowd, there were less than 2,000 fans in attendance, I witnessed perfection for the first time.

First, rewind back to the night before. The Wild Things were auctioning jerseys off for Ovarian Cancer night, and I decided to bid on one of my favorite pitchers and Sunday’s starter, Matt Sergey (or “Other Matt” as we affectionately called him.) Little did I know what special part that jersey would have in my collection and what special part that pitcher would have in my baseball memories.

Sunday’s “Kids Day” game started like every other one that season… 5:05 start, attendance in the low thousands, and I was sitting in Row B seat 8 of section 101 as I had done every game I had been to that season. Matt Sergey, who had been used in relief for the majority of the season, was given another shot at being a full-time starter. As he left the bullpen for the start of the game, I yelled “Good Luck Other Matt” like I had done every time he went into the game. Everything was the same routine as it had been all season long, except that the game turned into something that was anything but routine.

Since I now claimed Matt as “my jersey guy”, I took plenty of pictures of him that day, and I am sure glad that I did. If you’ve never experienced a perfect game in person, I’m not sure if my words will be able to convey the true emotions of the game, especially if you have a personal connection with the person on the mound attempting to make history. The game was cruising along nicely, and Matt was dealing on the mound.

I remember looking up at the scoreboard in the 5th and seeing all zeros. Our scoreboard in Washington doesn’t count walks, so I hurried up and checked the PointStreak stats on my phone to see if anyone had been on base at all. I realized that he had more than just a no-no going on… he was chasing perfection. As my anxiety was growing, I started asking everyone else in 101 if they saw exactly what was happening. Following baseball superstitions, none of us said the words “perfect game” as we all (un)patiently sat in our seats watching the game unfold.

I took notice in the 5th and had been anxious ever since, but I would say that the 7th inning is when I started living and dying by every pitch. Each at bat made me nervous, and I would sit watching our defense intently. In section 101, we were passing around the heart monitor app and checking our pulse as our hearts were beating faster and faster with each out. Glancing around the ballpark, you could see that everyone else was slowly starting to catch on to what was happening on the field. The crowd hushed on balls and long fly balls and cheered loudly for every out. By the top of the 9th, half the crowd was already standing, and with one out to go, not one person in the ballpark was sitting.

When the Gateway Grizzlies’ batter hit a ground ball to short stop, Ryan Kresky, who promptly threw the ball to 1st baseman , Garrett Rau, for the last out of the game, I was going absolutely insane. Seeing Matt drop to the ground and pound his glove into the ground caused me to have tears in my eyes. The emotion he showed, the emotion our whole team showed rushing the mound, was just something that I will never be able to forget. These were guys who I truly cared about on and off the baseball field. This team (this #SQUAD) was special. And not only was it the first perfect game in Wild Things history, but the first in Frontier League history! 22 years and no one had thrown a perfect game before. “Other Matt” only needed 100 pitches and 2 hours and 51 minutes to become “Perfect Matt” that day.

Talking to Matt after the game and getting that soaking wet Gatorade hug was hands down THE baseball moment that I will never forget. Being a part of something so special was amazing, and no matter what I type, words cannot do it justice.

Here’s the WildThings’ YouTube video of the final out: https://www.youtube.com/watch?v=XgOGPKnf_E4&list=PLFyTVgsCuEO0VDr8gtvjeO3eeXX6405TJ 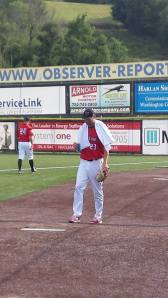 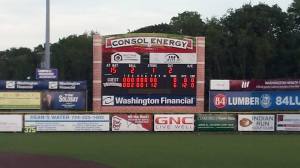 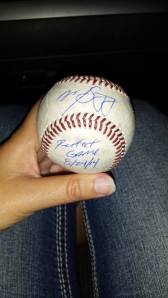 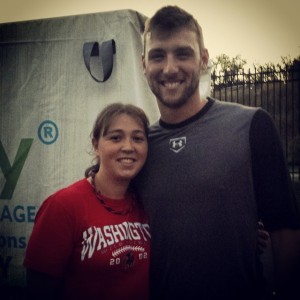 So… what is YOUR favorite baseball moment?