Usually on this site, I provide information on various leagues and write stories about players – detailing where they’ve played and what their stats look like.

This story is going to be just a little bit different, but it’s educational all the same.

As some of my readers and followers know, I am actually a teacher when I’m not doing this baseball writing stuff!

This past week, I was substitute teaching my favorite 8th grade class.  I have gotten to know these students from my student teaching experience at the end of last year and have also filled in as a substitute for them whenever possible.  My students know how much I love baseball, and some even know about this site and what I do when I’m not in front of their classroom.

Yesterday, I got the opportunity to go with them as their teacher to the Education Day game between the Washington WildThings and the Black Sox.

I’ve known the Black Sox coach, Andrew Rosario, for a couple years, and I have also gotten to know some of the players who happened to be with the team yesterday.

For those of you who don’t know, the Black Sox have a few teams throughout the country with players who are either looking for jobs or looking to get in reps and stay in game-shape until their professional season starts. They travel across the country, paying their own way, just to play baseball.

Their hard work and dedication to the game is inspiring… which is why I got so excited that they were the visiting team for the Education Day game. I knew it would be a perfect learning experience disguised as a field trip for some of my students.

Before the game, I went down to talk to a few of the players as well as coach Rosario and let them know that I’d love to bring some of my students over to meet them and talk baseball. They were more than happy to agree.

During the game, I rounded up a group of boys who play little league, love the game, and definitely look up to the players who get to play the game for a living. As their teacher, I can only hope that they have good baseball role models to follow. I knew these guys were pretty good examples of that.

I took them down to the bullpen and later to the dugout, and the players did exactly what I hoped they would do… they asked them their names, their positions, what teams and players they liked, and then… they just talked baseball. They told the boys where they played, what they were doing, and how they got to be on a team playing in Washington, PA. They talked about the grueling schedule and how they put in the hard work to do something they love. And my students were listening to everything. It may have been only 5 or 10 minute conversations, but those boys talked about it for hours after. The guys even signed countless autographs yesterday for many of my other students as well.

Some of the Black Sox players have been around professional baseball for years, but some are rookies out of college.  For those rookies, this was one of the first times they’ve ever had kids interested in hearing their stories and getting their autographs. It honestly was a great educational experience for both the players and the students.

Getting to see how excited both sides were when they interacted with each other was an amazing thing that I doubt I’ll forget any time soon. It makes teaching and what I do with baseball so worth it.

To the Black Sox players and the Wild Things players as well who were down by their dugout signing, thank you for making Educational Day and an end of the year field trip so special for so many kids. 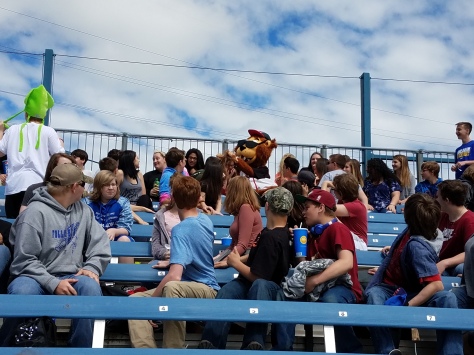 Special shout out to the WildThings’ mascot for coming up and interacting with my students as well!! You are one of a kind! (Future story on this is also in the works!)

If you are interested in playing with the Black Sox, you can check out more information on their official website –  Black Sox: Pro Baseball Road Warriors.

3 thoughts on “Education Day with the Black Sox”