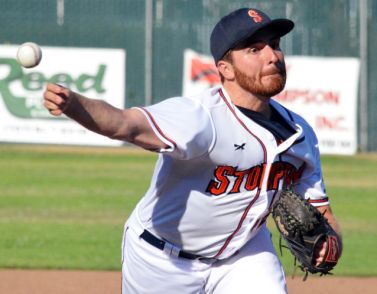 23 year old rookie, Sean Conroy, made his first professional start on June 25th. Conroy, a pitcher for the Sonoma Stompers in the Pacific Association, had pitched exclusively out of the bullpen earning four saves before his start on Thursday.

The rookie’s starting debut was impressive. He pitched nine scoreless innings, striking out 11 and only allowing three hits in the Stompers 7-0 victory during their Pride Night celebration.

Why is the fact that his first start came on Pride Night so important?

Conroy just so happens to be baseball’s first active professional player to come out as gay.  Even though he is the first, he doesn’t seem concerned about it.  Openly gay since 16, Conroy has always been upfront and truthful about his sexuality with his teammates throughout school.  He didn’t feel as if it should be any different after he joined the Stompers.

He just wanted to help his team and set an example for any other players or people in the same situation.

“It’s not that I wanted it to go public, but I didn’t care if it was open information. It’s who I am,” Conroy said, according to the AP. “I am definitely surprised that no one else has been openly gay in baseball yet.”

“I’ve always played baseball because it was fun, and I loved the sport,” Conroy told The Press Democrat. “Being gay doesn’t change anything about the way I play or interact with teammates.

“I hope that in leading by example, more LGBT youth will feel confident to pursue their dreams, whatever those dreams may be.”

In order to allow Conroy to focus solely on his pitching, the Stompers did not make any special announcement. There weren’t even obvious signs that it was Pride Night at the ballpark except for the rainbow socks and arm sleeves that some players wore in honor of the celebration.  However, one player who didn’t wear anything special was Conroy.  He wanted his performance to speak for itself.  And it certainly did.

While Conroy will probably never make the major leagues or even affiliated ball – he only throws around 84-85 mph – there is still no denying that his impressive start was important in more ways than one.