Phillips is expected to join the Admirals on Thursday for their game in Sonoma. He will then play during the two-game homestand on Friday and Saturday. 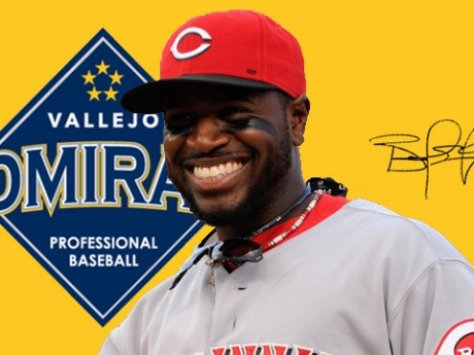 “It’s a pleasure to be managing my brother,” P.J. Phillips said. “It was a dream to play with him and it’s exciting to have him be part of the Admirals.”

Brandon Phillips last played in the Major Leagues last year, playing nine games for the World Champion Boston Red Sox. He spent 11 seasons with the Cincinnati Reds, starting mostly at second base. He is a lifetime .275 hitter with 209 stolen bases in the big leagues. He was named to three all-star teams (all during his time with the Reds) and earned four Gold Glove awards at second base. He also won one Silver Slugger award.

“I’m excited to be playing for my brother.” Brandon Phillips said. “I’ve always hit the ball well in California.”

Brandon Phillips twice earned Most Valuable Player votes, finishing 13th in 2012 and 22nd in 2007. In 2007, he hit a career-high 30 home runs with 94 RBI to go along with 32 stolen bases (also a career-high). He was the third player in Cincinnati history to hit 30 home runs and steal 30 bases in a single season.

The Phillips brothers both graduated from Redan High School-Stone Mountain (Ga.) and each was drafted in the second round of the MLB draft: Brandon in 1999 by the Montreal Expos and P.J. in 2005 by the Los Angeles Angels of Anaheim. Their sister Porsha Phillips played for the San Antonio Silver of the WNBA and their brother Jamil played in the Texas Rangers organization.

P.J. Phillips is in his fourth season as manager of the Admirals. He played six seasons in the Angels organization and one in the Reds organization.